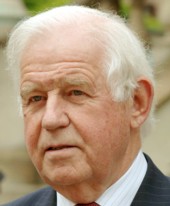 Dr. Kurt Biedenkopf is the former Prime Minister of the State of Saxony, Germany. He is a man who has had educational experience in the United States as well as in Germany; a distinguished professor of law; a distinguished leader; and someone who has throughout his life been at the cutting edge not only of politics, but of business, too.

A leading German politician and acknowledged expert on integration Dr Biedenkopf has been instrumental in the development of the former East Germany. In his presentations he focuses on how the transition process has resulted in a revitalization of the community - politically, culturally and economically and the new business opportunities it now presents to corporations from all over the world.

He is a scholar of political science and law with a doctorate from the University of Munich. His teaching career began at Ruhr University Bochum in 1963 as professor of law, and he served as rector from 1967-69. From 1968-70 Professor Biedenkopf chaired the Federal Government Commission on Co-determination.

He has published several books and has been awarded doctorates by Davidson College, Georgetown University, and Catholic University. In 1990 during the transitional period to democracy and market economy he was guest professor of law at Leipzig University.

Dr Biedenkopf offers decision makers a wealth of useful information and he is much in demand as a conference speaker. In addition to German he speaks English fluently.