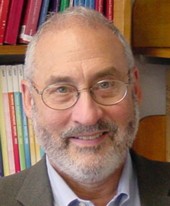 Joseph Stiglitz is a leading economic educator and is the former Chair of The Commission of Experts of the President of the UN General Assembly on Reforms of the International Monetary and Financial System. In 2009 Thinkers 50, the global ranking of management gurus, placed him among the list of most influential thinkers. He won the Nobel Prize for Economics in 2001, before that President Clinton appointed him Chairman of the Council of Economic Advisers in 1995. A former Chief Economist to the World Bank, he is currently Economics Professor at Columbia University.

Joseph Stiglitz is the most cited economist in the world, as of June 2008

A pioneer in the field of the application of economic theories, he helped create the new branch of economics ‘The Economics of Information’. Founding editor of The American Economics Association’s Journal, he also holds numerous prizes and doctorates in recognition of his groundbreaking work. He is the co-founder and President of the Initiative for Policy Dialogue (IPD), Chair of the Management Board, Brooks World Poverty Institute, University of Manchester and Co-Chair of Columbia University Committee on Global Thought.

Since pioneering a new branch of economics ‘The Economics of Information’, he has continued to offer tools for policy analysts.

Professor Stiglitz explores how markets are influenced and the effects of various circumstances on their success; concluding with views on how performance can be improved.

With humour he delivers the most informative of messages that convey the global economic context with ease.