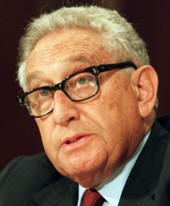 Author Henry Alfred Kissinger was sworn in on September 22 1973 as the 56th Secretary of State, a position he held until January 20 1977. He also served as Assistant to the President for National Security Affairs from 1969 until 1975. In 1983 he was appointed by President Reagan to chair the National Bipartisan Commission on Central America until it ceased operation in 1985, and between 1984-1990, he served as a member of the President's Foreign Intelligence Advisory Board.

Among his other activities, he is a member of the Boards of Directors of American Express Company, R H Macy and Company, Continental Grain Company, CBS Inc., The Revlon Group Inc., and Freeport-McMoRan, Inc. He is a Trustee of the Metropolitan Museum of Art and a Director of the International Rescue Committee.

Among the awards Dr Kissinger has received have been the Nobel Peace Prize in 1973; the Presidential Medal of Freedom (the nation's highest civilian award) in 1977; and the Medal of Liberty in 1986.

Dr Kissinger has written and published numerous articles on United States foreign policy, international affairs and diplomatic history. His column, syndicated by the Los Angeles Times Syndicate, appears in leading US newspapers and in over 40 foreign countries.