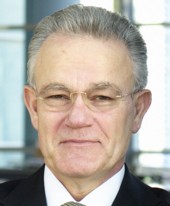 Prof. Dr. Hans-Jörg Bullinger began his career as a manufacturer for the Daimler-Benz company in Stuttgart. He subsequently went on to study at the University of Stuttgart gaining a Master’s degree and a Ph.D. in Manufacturing which led him to become an expert in this field.

Prof. Dr. Bullinger was in charge of the Stuttgarter Fraunhofer-Institute of Production Technology and Automation for a number of years. Here he was responsible for numerous applied research projects in the field of design and manufacturing with the aim of increasing the productivity of computer based systems. These projects also involved well known German companies including Robert Bosch, Siemens, VW and Daimler Benz. Prof. Dr.Bullinger also worked on projects abroad and was often invited to give lectures in the United States, Japan, Korea, China, India, Australia and South America.

He became a full time lecturer at the University of Stuttgart as well as becoming Chairman of the University. Prof. Dr. Bullinger is also the head of the Institute for Human Factors and Technology Management (IAT) and the Fraunhofer-Institute for Industrial Engineering (IAO). Both these institutes are renowned for projects in Germany and abroad.

Prof. Dr. Bullinger has won several awards for his work including the Kienzle-Medal from the University Group of Manufacturing. In 1982 he was awarded the gold Ring-of-Honour by the German Society of Engineers (VDI). In 1986 he received the the Distinguished Foreign Colleague award from the Human Factor Society. In 1991 he became an honorary Doctor at the University of Novi Sad and honorary professor at the University of Science and Technology of China in Hefei.

Since 1993 he has been a member of the World Academy of Productivity Science and in 1994 an elected honorary member of the Romanian Society of Mechanical Engineers. In 1995 he received the Arthur Burckhardt Award and in 1998 the Order of the Federal Republic of Germany.

Throughout his career he has written over nine hundred articles and books regarding industrial engineering.