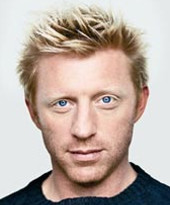 Boris Becker entranced tennis fans when in 1985, aged just seventeen, he became the youngest ever player to lift the famous cup at the All England Club. The German became a tennis legend, taking the Wimbledon title twice more. His career haul of 49 titles included two Australian Open crowns and one US Open success. He remains a hugely popular figure at Wimbledon and commentates there for the BBC each year.

Today he is a successful businessman and advertising icon. 2013 to 2016 he was coach of the world's best tennis player Novak Djokovic. He is also known as a reporter (BBC) and columnist for various media (Handelsblatt, Blick, The Times). Since August 23, 2017 he is "Head of Men's Tennis" of the German Tennis Federation.

Boris exploded onto the tennis scene in 1985, when he became the youngest male ever to win the Wimbledon singles championship. His victory was considered a fluke by some because none of the top seeds reached the final that year; he won a four-set over unheralded Kevin Curren to take the title. However, Boris proved it was no fluke by winning the championship again in 1986, this time beating Ivan Lendl. He reached the finals four years in a row, from 1988 through 1991, winning the final for a third time in 1989. He also won the U. S. Open in 1989 and the Australian Open in 1991 and 1996. He finished his career with 49 singles titles and 15 doubles titles.

With a career in tennis spanning two decades, Boris entertains and inspires audiences as he draws up on his experiences as a top international tennis player and the lessons learned in dealing with an insatiable media.

An affable and likeable personality, Boris is in great demand as a speaker around the globe by audiences eager to hear his inspirational message.