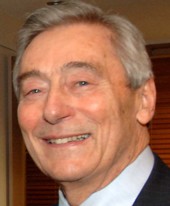 An excellent speaker with immense credibility on high level Management and Planning.

Arie de Geus joined Royal Dutch Shell Group in 1951. His main area of expertise was in finance. He became Finance Director and later moved to general management. In 1979 he was appointed a Director of Shell International. In his last ten years with Shell his interest shifted to subjects such as the ‘nature of large corporations’, ‘their decision-making process’, and ‘the management of change’. His interest was fed by the unique vantage point he enjoyed at Shell and in March 1988, Harvard Business Review published his article ‘Planning is Learning’.

Since retirement in 1989, he has been appointed head of an advisory group to the World Bank, adviser to the Office of the Auditor General of Canada and adviser to the Dutch Ministry of Transport and Communications.

Arie de Geus is a Visiting Fellow at London Business School and has been involved in the creation of the Sloan School's Organisational Learning Centre. He is also a consultant to corporations in the United States, the Netherlands, Sweden, Finland, Germany and South Africa.

After extensive research, his book ‘The Living Company’ was published in April 1997 in the UK. Following its major success in the US, it also took the European business world by storm, and recently achieved second-place in the 1997 McKinsey Awards. The most successful companies are those that are best at learning and understand that effective decision-making is essentially a learning process. His lectures are a stimulating, thought-provoking experience.