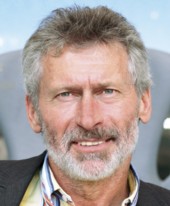 Paul Breitner is considered one of the most successful German football players and can look back on a brilliant national and international career. Perhaps one of Germany's most controversial players, he was capped 48 times for his country. He currently works as a football commentator, TV critic and regular columnist for Bild in Germany. In 2007 entered into a contract with FC Bayern Munich to act as an advisor on various issues.

Paul Breitner, a founding member of the Children's Sports Foundation, is without doubt one of the most successful German footballers of all time. He offers audiences exciting insights into the world of sports and shows how motivation can help us all achieve our goals.

Paul Breitner is a very charismatic individual as well as a great speaker who energizes and captivates his audiences.

He presents in German, English & Spanish.