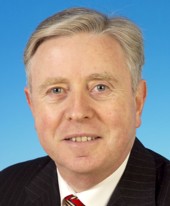 Former President of the European Parliament

Pat Cox was President of the European Parliament until Mid 2004. He has been an MEP since 1989, representing the constituency of Munster in the Republic of Ireland. Before entering politics he worked both as an economics lecturer and as a journalist and TV presenter. In 1998 he was first elected President of the European Liberal Democrat Group. He was unanimously re-elected in June 1999. In 2004 he received the ‘Charlemagne Prize’ for Great European Achievement.

Pat Cox graduated from Trinity College in 1974. He went on to become an economics lecturer at the Institute of Public Administration in Dublin and the University of Limerick. Between 1982 and 1986 he worked as a television current affairs reporter, presenter and investigative journalist on the TV programme Today Tonight. He reported on Irish and international economic issues including US Presidential elections, the United Kingdom and French general elections.

Having worked closely with all matters concerning member States of the E.U Pat Cox is ideally placed to offer crucial advise and information to decision makers from all industries wishing to take advantage of the expanding European market place.

With a background in lecturing and broadcasting, Pat Cox is an informative politician and speaks knowledgeably about the role played by the European Parliament in the enlargement of Europe and what the future holds.