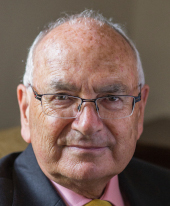 Anthony Glees is a renowned British contemporary history historian and political scientist from the University of Buckingham. The expertise of the author and publicist is in demand worldwide.

He is regarded as an outstanding specialist in the history of Germany, deals with the European Community and issues of terrorism and Islamism and their fight against.

From 1988 to 1990 he was a consultant to the British Home Office for the investigation of war crimes, and he was in demand as a contact person of the British and the European Parliament in security matters.

He gives his keynotes in German and English.