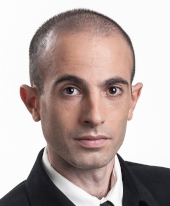 Prof. Yuval Noah Harari is the author of the international bestseller ‘Sapiens: A Brief History of Humankind’. The book surveys the entire length of human history, from the evolution of Homo sapiens in the Stone Age up to the political and technological revolutions of the 21st century.

Prof. Harari received his Ph.D. from the University of Oxford in 2002, and is now a lecturer at the Department of History, the Hebrew University of Jerusalem. He specialised in World History, medieval history and military history. His current research focuses on macro-historical questions: What is the relation between history and biology? What is the essential difference between Homo sapiens and other animals? He has twice won the Polonsky Prize for Creativity and Originality, in 2009 and 2012. In 2011 he won the Society for Military History’s Moncado Award for outstanding articles in military history. In 2012 he was elected to the Young Israeli Academy of Sciences.

Prof. Harari is one of the most widely-read and cited historical authors of today. His ideas have profoundly influenced the teaching and writing of anthropology around the world.

With a historical eye and his characteristic combination of wit and wisdom, Prof. Harari’s articulate and eye opening talks are in great demand by corporate clients the world over.