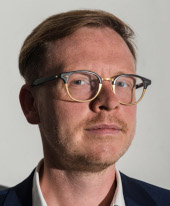 Prof. Dr. Markus Gabriel is one of the world's most prominent representatives of New Realism in philosophy, which is an essential factor in his current project of a New Enlightenment. At the age of only 29, he became the youngest full professor of philosophy in Germany.

He studied in Heidelberg, Lisbon and New York. Since 2009, he has held the Chair in Epistemology, Modern and Contemporary Philosophy at the University of Bonn, and is Director of the International Center for Philosophy. He is also Director of the Center for Science and Thought, which pursues interdisciplinary exchange between philosophy and the natural sciences in order to find productive and sustainable solutions to the most pressing questions of our time.

He has held visiting professorships in Brazil, Denmark, France, Italy, Japan, Portugal, and the United States. Since 2020, he has been Distinguished Lecturer in Philosophy and the New Humanities at the New School for Social Research in New York City, where he is building a new institute with colleagues from a variety of disciplines. In 2021, he became a fellow at The New Institute in Hamburg, where he conducts research on issues related to practical philosophy (with a focus on value theory, i.e. ethics and political philosophy in an applied context).

For the Süddeutsche Zeitung he is "one of the most important contemporary German philosophers", for the Neue Züricher Zeitung “a speculative prodigy."

His best-selling books have appeared in numerous countries such as Argentina, Brazil, Chile, Great Britain, Japan, Mexico, South Korea and the United States.

He loves to make philosophy understandable to all, and is rarely found in one place. Personal encounters are his favorite, along with Zoom and Signal. He believes in the bright light of a new enlightenment and in our ability to make this world a better place with the help of the conceptual tools of philosophy and the humanities.

With insight and empathy, he inspires his audience as a speaker. Prof. Gabriel ("The thinker of the hour." Die Zeit) literally rethinks reality with us and - quite incidentally - delivers a crash course in philosophy. This is exciting, fun and takes place at eye level with reality. Because nothing is too banal or too far-fetched, everything is allowed. In this way, even complex issues become vivid and tangible.