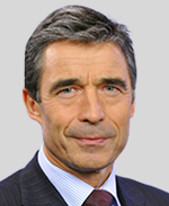 Anders Fogh Rasmussen has been at the centre of European and global politics for three decades as Secretary General of NATO, Prime Minister of Denmark, Danish Minister of Economic Affairs, and a leading Danish parliamentarian. During his time with NATO, he developed a new Strategic Concept, which set the Alliance’s core priorities for the future. In the midst of the most serious economic crisis in recent time, he launched “Smart Defence” to help nations make more efficient use of their resources through more multinational cooperation

“We have reinforced the Alliance to make it fitter, faster and more flexible"

He studied economics at the University of Aarhus. In 1998, Mr Rasmussen became chairman of the Liberal Party and leader of the Danish opposition. In 2001, Mr Rasmussen became Prime Minister. His government was re-elected in 2005 and 2007 respectively and he held the position as Prime Minister until he was elected as future NATO Secretary General. Mr Rasmussen took office as the North Atlantic Treaty Organization’s 12th Secretary General on 1 August 2009 and held that position until 30 September 2014. His tenure marked a fundamental transformation of the Alliance.

Drawing from his experience, Mr Rasmussen firmly believes that the enlargements of the EU and NATO have contributed to peace, progress and prosperity in Europe. He has achieved much diplomatic success as an extraordinary consensus-builder working behind the scenes with leaders of various nations. In his presentations he explains the tactics needed to promote world peace and security and the benefits to be reaped from achieving global stability.

A respected voice in international politics, Anders Fogh Rasmussen is an experienced and skilled communicator whose presentations engage worldwide audiences keen to hear his unique perspective on a variety of current issues.

He presents in English and Danish.