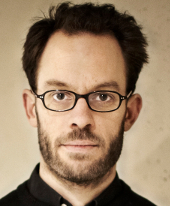 Daniel Domscheit-Berg helped build the WikiLeaks platform from late 2007 to September 2010, and acted as its spokesperson under the pseudonym Daniel Schmitt. He quit WikiLeaks over disputes about its strategic orientation, lack of transparency and management style. Domscheit-Berg wrote a book about his experiences “Inside WikiLeaks”, that was published in early 2011, was translated into 23 languages and was one source for the subsequent Hollywood movie “The Fifth Estate”.

A network security expert by trade, Domscheit-Berg is an advocate for transparency and freedom of speech by heart, deeply caring for equal access to knowledge and information in a globalized world. Selected a Top 100 Global Thinker by Foreign Policy Magazine in 2011, he has presented and debated on future chances as well as risks in a digitized and networked world in a multitude of both national and international conferences and fora, spanning a broad range from universities via commercial venues to the World Economic Forum, and is regularly present in national and international media on said topics. Before WikiLeaks, Domscheit-Berg worked for various fortune 500 companies, mainly building enterprise-scale wireless and wired networks for the automotive and transport industries.

Daniel Domscheit-Berg today is involved with various internet projects related to privacy and anonymity, and furthering the decentralization of the Internet’s infrastructure, Running a small innovation lab in Brandenburg’s countryside, he passionately teaches kids about electronics and technology, and grows vegetables in a networked garden. In 2015, he will be working on bringing the open fibre broadband revolution to Germany.

Daniel Domscheit-Berg is a wide-eyed and soft-spoken speaker, in great demand at worldwide events.