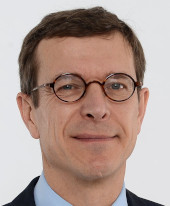 Expert on the US and on president Obama,Correspondent of the Berlin Tagesspiegel in Washington

Christoph von Marschall is a renowned expert on the US president, Barack Obama and his wife Michelle. As bureau chief of the Berlin Tagesspiegel in Washington, he followed Obama's two year campaign, closely observing the presidential couple even after their entry into the White House. He writes for major internal magazine including Die Zeit, Cicero and the Atlantic Times. Marschall appears frequently as a commentator in the international media.

Christoph von Marschall holds a Ph.D. in Eastern European History from Freiburg University. His journalistic career began in 1989 at the Süddeutsche Zeitung and he has won several awards: In 2002 he received the German-American Prize for a commentary post related to the terrorist attacks of 11 September 2001 and its consequences for American foreign policy. In 2005 he was honoured with the German-Polish journalism award for a report on Skierbieszów, the birthplace of the Federal President Horst Köhler. In the same year he was awarded the Order of Merit of the Republic of Poland for his contribution to the German-Polish reconciliation.

Christoph von Marschall openly talks about his unique experience following the President-Elect during the 2008 elections. He expertly analyzes how the questions of race, religion and the economic crisis dominate America's policy. The award winning journalist offers insights into the political landscape of the United States of America and the role of Europe.


In his highly sought-after presentations, Christoph von Marschall provides his audiences with a vivid and insightful analysis of power relations and the political climate.

He is fluent in German, Polish, French and English.