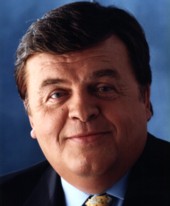 Helmut Thoma was considered the most influential Television Manager in Europe. Under his influence RTL grew to Europe’s number one television station. On first of November 1998, he stepped down as the RTL Television Manager after 12 years of successful management of the biggest private television station in Germany. Prof. Dr. Helmut Thoma was born in 1939 in Vienna. After completing his law studies and obtaining his doctorate, he worked in various legal practices and in court.

In 1966 he joined the Austrian Television and Radio (ORF Wien) and two years later he became the ORF-legal advisor. In 1975, he was appointed attorney to the RTL-monopoly and in 1975 overall manager of IPA, Frankfurt.

In 1982 Helmut Thoma’s promotion as Programme director of the German speaking RTL Radio Luxembourg was followed in 1984 by that of programme director of all German RTL-programmes, RTL Radio Luxembourg and RTL plus Television. In 1986 he was appointed spokesman of the German RTL plus Television-management and in 1990 he was elected managing director. Since 1998 he is Chairman of the RLT-advisory council.