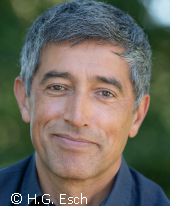 Ranga Yogeshwar is the head of the science department of WDR German TV and oversees the production of various popular science programs. As producer and presenter of some 1000 popular science programs such as Quarks & Co, Mega (arte), Kopfball, and Globus he has won many awards for his work. His main fields of interest include the popularization of science and the relationship between science & technology and culture.

Ranga obtained his degree of Diplomphysiker at Aachen University with specialisation in Experimental Particle Physics and Astrophysics. He complemented this by working at the Swiss Institute for Nuclear Research (SIN), at the CERN in Geneva and at the Research Centre, Jülich (Germany). He is a member of the curatorium of various Max Planck Institutes as well as universities and science organisations. He is author/co-author of several newspaper and magazine columns and articles in learned periodicals

Ranga Yogeshwar is a vastly experienced producer and presenter engaged in many national and international projects and member of boards and committees of institutions in the fields of Innovation, Education and Knowledge Propagation. He is a founder-member of the Children's and Youth Foundation of Hennef

Ranga Yogeshwar is in demand at events whether moderating, hosting, presenting or handing out awards

He presents in German, French and English.