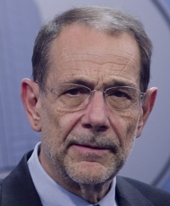 Javier Solana held the prestigious position as High Representative for the Common Foreign and Security Policy (CFSP) for ten years. During this time, he was also Secretary-General of the Council of the European Union (EU) as well as Western European Union (WEU). At the beginning of 2010 he joined ESADE Business School as President of its new Centre for Global Economics and Geopolitics where he will focus on the evolution of the global society, analysing the global economy, corporate leadership and good practice in public policy.

He holds a doctorate in Physics and is a tenured professor of the University in Madrid. Between 1982 and 1995 he held several cabinet posts in the four governments headed by Spanish Prime Minister Felipe Gonzales before becoming Secretary General of NATO from 1995 to 1999. During his time at NATO he reorganised its political and military structure and changed its basic strategies. In 2004 he was the first Foreign Minister under the new EU constitution. He also represents the EU in the Middle East Quartet

Javier Solana has achieved much diplomatic success as an extraordinary consensus-builder working behind the scenes with leaders of various nations. In his presentations Javier Solana shares his achievements and explains how over the past 10 years he succeeded in establishing Europe as a global player whose voice is heard on every continent.

A respected voice in European politics, Javier Solana is an experienced and skilled communicator whose presentations engage worldwide audiences keen to hear his unique perspective on a variety of current issues.

He presents in Spanish & English.