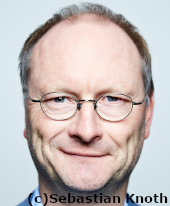 Sven Plöger is a German meteorologist, presenter, documentary filmmaker and author. He currently presents several radio and television weather programs, gives lectures and is the author of several non-fiction books on the subject of weather and climate. He is known to many viewers especially from "Wetter im Ersten" before the “Tagesschau” and after the "Tagesthemen"

Sven Plöger studied meteorology at the University of Cologne until 1996 and has since worked as a media meteorologist.

In 2002, Sven Plöger began giving lectures on weather and climate. His enthusiasm to introduce interested laymen as well as professional audiences to these topics led to the development of a second professional focus in addition to daily weather forecasting. The experienced media professional also moderates panel discussions and lecture events.

Sven Plöger is a very much appreciated and competent guest in numerous talk shows and major TV shows, where he participates in the current intense debate on climate change and the energy transition. He also writes guest articles on the current climate debate.

For SWR television, Sven Plöger has been leading the program "Spuren im Stein" (Traces in the Stone) together with Lena Ganschow since 2016 - an exciting search for clues through the history of the earth in various regions in southwest Germany.

Sven Plöger has always been fascinated by flying: In his free time - and time and again in his documentaries - he experiences the weather from a completely different perspective: in a glider or by paraglider.

With many pictures and stories and with a lot of humor, Sven Plöger takes his audience along and answers important questions of the current climate discussion. It is a great concern of his to make the often very emotional climate discussion more objective.

His relaxed "chatting style" lets the audience join in and makes them want to ask questions that have always been burning on their minds. The illustration with lots of pictures makes sure that the content sticks, because exciting weather pictures are easily memorised by each of us!