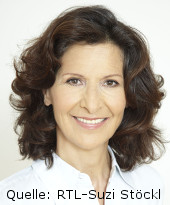 Antonia Rados is Germany's most renowned reporter, a first-rate journalist from Austria with 30 years experience and an open mind on people and events. She gained recognition, becoming known for her reporting from Baghdad during the Iraq war in 2003. She has stopped counting the number of times she has travelled to and reported from Afghanistan.

Antonia Rados studied political science in Paris and Salzburg, attaining a Ph.D. She won the German TV Prize and the Hanns-Joachim Friedrichs Award for her wartime coverage from Iraq. She also received the Robert Geisendörfer Prize, the German Camera Award and a nomination for the Grimme Prize and the German Television Prize. Her journalistic career had begun in the Austrian ORF. In 1991 she went to the WDR, from there she moved on to RTL. She had left in 2008 to join ZDF, where she was to work for the heute-journal. In November, RTL Television announced her return to Mediengruppe RTL Deutschland.

Antonia Rados is a Middle East expert who has won numerous awards for her tireless and courageous work in documentaries on crisis-torn regions. As a speaker at major national and international forums, she vividly explains what it means to people in a war zone, that someone is interested in their fate and she provides insights into the constant battle against the stereotype of the emotional woman.

Antonia Rados always displays a great deal of energy and enthusiasm, known as being an objective and sophisticated reporter. With vast media experience, she is a courageous and charismatic presenter.