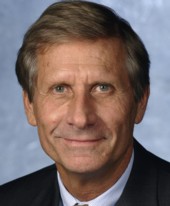 Ulrich Wickert is a presenter, writer and politically committed publicist. He was born in Tokyo, his father was an employee of the German Embassy. He spent his childhood in Heidelberg and Paris (1956-59, father at NATO).

Wickert studied political science and law in Bonn, and in 1962 he went to Wesleyan University (Connecticut/USA - first state examination in law in 1968) as a scholarship holder in the Fulbright Program.

Wickert began as a freelance radio writer for the ARD and became an editor. From 1969 to 1977 he worked for the program “Monitor”, and was sent by WDR to Paris for every presidential election from 1969 to 1978. In 1978, the "Media Man of the Year" (1992, "Horizont Award") was transferred to the ARD France studio as a correspondent. In 1981 he founded the discussion group "Journalists for Open Broadcasting", took over the management of the ARD studio in New York, and in 1984 he became head of the ARD branch in Paris. Since July 1, 1991, he was the "first presenter" of the ARD news program “Tagesthemen” ("Some news prohibit the joke").

From August 17, 2006 to May 20, 2007 he hosted the ARD program "Wickerts Bücher" (Wickert's Books), where he talked to authors (until 2014 on NDR Kultur). In the winter semester 2004/05, Wickert, who is fascinated by the writer Eugéne Ionesco, became honorary professor at the University of Applied Sciences Magdeburg-Stendal (journalism, media management). This was followed in 2015 by the Frank Loeb Visiting Professorship at the Frank Loeb Institute at the University of Koblenz/Landau. In 2016 he was the holder of the Heinrich Heine Guest Professorship at Düsseldorf's Heinrich Heine University.

In November 2005, Wickert ("I'm afraid of empty phrases") was named an officer of the Legion of Honour for his services to Franco-German relations.