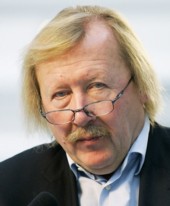 Peter Sloterdijk is probably the foremost German thinker of today, and certainly one of the most controversial. Strongly inspired by Heidegger, Sloterdijk is well known for his examinations of the modern human condition through engaging discussions on genetic engineering, mass media, and the unification of Europe.

Prof. Peter Sloterdijk, Philosopher and author of Kritik der zynischen Vernunft was born in Karlsruhe in 1947. He completed his studies in philosophy, German studies, and history in Munich in 1975, graduating in Hamburg with a study for the philosophy and history of modern autobiographic literature in 1980.

Sloterdijk became a freelance writer after graduation. Numerous works covering time diagnostics, culture and religion philosophy, art theory and psychology have been published up to 1992. His publication Kritik der zynischen Vernunft” is the highest sold philosophical work in the German language since the Second World War.

Sloterdijk is Chair for Philosophy and Aesthetics at the Karlsruhe State University. In 1993 he received the Ernst-Robert-Curtius Prize for Best Essayist. Prof. Sloterdijk is also a guest Professor at the Academy of the Forming Arts, Vienna Bard College, New York, and guest Lecturer at the College International de Philosophie, Paris, and the Swiss Federal Technical University in Zurich. Since 2001 he is president at the Karlsruhe State University of Design.

A modern philosopher in every sense, who will shock, inspire and enlighten all audiences with a touch of humour thrown in, Prof. Sloterdijk’s unique philosophical language successfully describes the undercurrents of modern thinking and society for today’s audience.