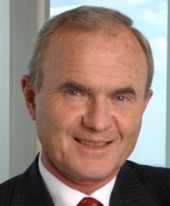 Otmar Issing is a leading monetary economist and one of Europe's most influential central bankers. He has played a key role since the ECB was established in the late 1990s as the central bank of Europe’s monetary union. As part of the German Government's effort to face up to the financial market crisis, in October 2008 Mr. Issing became director of the commission of experts to consider reforms to the international financial system. He is the President of the Centre for Financial Studies and member of the Advisory Board of Globalisation and Monetary Policy Institute at Federal Reserve Bank of Dallas.

Prof. Issing studied classical languages before becoming a central banker. He holds several professorships and doctorates and has been awarded with International Prize of the Friedrich-August-Hayek Foundation and Order of Merit of the Federal Republic of Germany) in 2006. He is the author of numerous books and writes regularly for the most important journals worldwide. He was co-founder and co-editor of the scientific journal WiSt.

Otmar Issing shows how to respond effectively to the challenges of globalisation. He provides audiences with his critical view on economic and monetary issues and their impact on the global economy. For the past few years, he has guided the ECB’s economic thinking and the successful switch from national currencies to a stable and strong Euro.

A knowledgeable and respected economist, Mr. Issing informs and educates audiences with his highly informative presentations.

He presents in English and in his native language German.