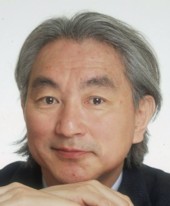 Michio Kaku is the Henry Semat Professor of Theoretical Physics at the Graduate Centre of the City University of New York. His goal is to complete Einstein's dream of a "theory of everything", a single equation that unifies the 4 fundamental forces of the universe. From interviews to documentaries, Dr. Kaku has explained the most fascinating and complex ideas in science today, in ways so elegant and easy to understand, much like the late Carl Sagan. On television he has been featured on the PBS documentaries: Einstein Revealed, Stephen Hawking's Universe, and Science Odyssey.

His technical books are required reading for scores of Ph.D. graduate students in major physics laboratories around the world.

He explains how science is opening entirely new avenues for society and organisations at large.

A mesmerising and humorous speaker he conveys a contagious sense of the wonders of science of today and tomorrow.

He delivers a clear message of tomorrow’s world propelling you into the future, which provides you with valuable advice on preparing for change. He presents in English.