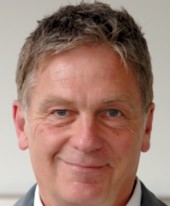 A globally acclaimed technology visionary and design/innovation guru, John Thackara is Director of ‘Doors of Perception’, an international conference and knowledge network that sets new agendas for design, in particular for information and communication technologies.

Having studied philosophy and journalism, John began his career in book publishing. For nearly five years he was Editor of Design Magazine, leaving in 1985 to become Modern Culture Editor of Harpers and Queen. He wrote and broadcast for the BBC and was the design correspondent for the major national newspapers.

Between 1987 and 1992, as founder and managing director of Design Analysis International (DAI), a consulting and production company, John organised exhibitions and conferences and wrote policy studies for governments, cities and corporations. At the same time, he was Director of Research at the Royal College of Arts.

Until the end of 1999, John was the Founder Director of the Netherlands Design Institute - a think-and-do-tank that explores future design scenarios. John has lectured on design, innovation, new media and the Internet, and has produced exhibitions at various locations around the world.

John has written extensively on design and about the Internet and advised clients at the highest level spanning the fields of education, the public and the private sector. His latest book ‘In the Bubble’ has been voted ‘Book of the month’ by Fast Company: "It's a graceful confluence of cutting-edge technology and dynamic human intellect. Thackara brings his idealism down to earth with a rich narrative full of cleaner, simpler design innovations currently blossoming around the world. Unplug your answering machine. Get out and join the revolution.”

In addition to being a member of the ‘Virtual Platform’, a body which advises the Dutch government on media cultural policy, John is Visiting Professor in computer related design at the Royal College of Art in London and he is on the Scientific Committee of the Interactive Institute in Sweden. He also helped Comite Colbert and London Business School set up a course on the design management of luxury brands, and John was twice Chairman of the European Design Summit.

John Thackara’s world-wide experience is invaluable, he is a most thought-provoking speaker and his presentations and workshops will bring you up to date with the fast moving world.