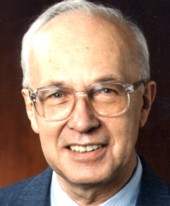 Former President of The Deutsche Bundesbank

A former President of the Deutsche Bundesbank, Helmut Schlesinger played an important part in the independent, tight fiscal management policy, which enabled West Germany and later unified Germany to build one of the strongest economies among the developed nations.
The name Helmut Schlesinger, like that of the Deutsche Bundesbank, whom he served for 40 years, has become synonymous with the crusade for low inflation and responsible and far-seeing economic and financial policies, and which have ensured the pre-eminence of the German Mark.
He has received a number of national and international awards, including the Dulles Honorary Professorship of Princetown University, New York. He has also been appointed to the Governing Board of the Bank for International Settlement; the Economic Sciences Board of the German Ministry of Economics, and is a lecturer at the Humboldt University of Berlin.
In 1998 the IMF in conjunction with the German Government appointed Helmut Schlesinger as adviser to the Government and the Governor of the National Bank of Indonesia, to assist in sorting out the country’s financial crisis.
He has a number of national and international publications to his name.