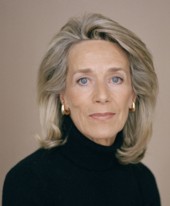 Gertrud Höhler is a Professor of German literature and an award-winning poet. In the last decade she has emerged as Germany’s most high profile management guru.

Since 1987 Gertrud has worked as an independent entrepreneur and consultant to the top fifty companies in the German speaking area and as an adviser to a whole range of the “great & good”, most notably the Head of Deutsche Bank. In the 90’s she became board member of GrandMet.

Gertrud studied Literature and History of Art in Bonn, Berlin, Zurich and Mannheim. In 1972 she was appointed to the University of Paderborn and since 1976 she has been Professor for General Literary Studies and German Studies.

Her book ‘Spielregeln Für Sieger’ (The Rules of the Game) was an immediate success, in which she offers different answers to all questions arising within the management debate of the 90’s and develops new strategies to connect theory and practice. In 1994 she published ‘Wettspiele der Macht’ (Power Games), which immediately entered the best-seller list.

Her new book ‘Die Sinn-Macher’ is about the new leader’s function. Hoehler defines how this spectrum of new management theory and practice is important for 21st Century enterprises and spotting “the best of the bunch”.