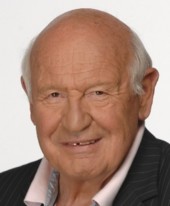 Dieter Kronzucker has achieved a fruitful and successful career in the media which started with the creation of a newsletter as a small boy at his school and has now led him (since 1991) to the position of Special Correspondent for one of Europe’s leading private television channels SAT.1,based in Brussels, and moderator of several news and information programmes, "Good Evening Germany" , "Quadriga" , SAT.1 News and the travel programme "Kronzucker on route". From 1993 until the election in November 1996, he reported from Washington. He is currently special correspondent for SAT.1 in Brussels.

From 1969 - 1973 he worked as correspondent in South America for ARD/WDR (one of Germany’s leading state-owned television channel).

1977 he became head of the newly created news flagship "Heute Journal" (ZDF). Subsequently he headed the ZDF Studios in Washington (1981-86), and for 2 further years headed and moderated the "Heute Journal" back in Germany.

In 1988/89 he wrote and then presented the TV documentary "Adventures and Legends", took him to all parts of the world.