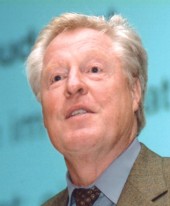 One of the Most Remarkable Lateral Thinkers in the Guild of European Industry Leaders, Bestselling Author

Daniel Goeudevert became one of the most renowned managers of the European car industry, having been appointed to the board of Citroën Germany, Renault, Ford Werke in Cologne and finally Volkswagen Group. His unusual career has led him to be First Vice President of Green Cross International, serving with GCI President and Founder Mikhail Gorbachev, until 1999. In April 1998 he was appointed Vice President of FEDRE (Fondation pour l’Economie & le Development de Regions d’Europe) and in October 1998 Vice President of EFI (Europe Finance et Industrie).

Daniel Goeudevert’s management style is regarded as unconventional, creative and highly innovative and has earned him the title of “Querdenker” or “Lateral Thinker”.

A former member of the Executive Committee of the “Club of Rome”, he has a very different attitude towards business and the role of managers. Integrity, flexibility, fairness as well as accountability are the main criteria for good management practices. However to succeed, a manager will also need to be creative, by adopting and implementing new ideas, even though these may not show benefits in the short term.

Daniel Goeudevert was awarded the Knight of the Legion of Honour, France; The Carlo-Schmid-Preis, Germany and the Commander’s Cross of the Order of Merit of the Federal Republic of Germany.
A challenging and charismatic speaker, he is fluent in French, German and English.