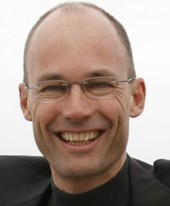 Round the World Balloonist & Initiator of the Solar Impulse Project

Bertrand Piccard is a well-known explorer and holder of two world records: flying round-the-world in a balloon and piloting the first ever solar plane, capable of flying perpetually without fuel. He was also the visionary and driving force behind the Solar Impulse Project which created this solar plane.

It is in Bertrand’s DNA to go beyond the obvious and achieve the impossible. The ocean depths and the stratosphere attracted his father and grandfather; the challenges of our time fascinate him. Rather than new territories, he wants to discover new ways of doing and thinking, in particular in the field of clean technologies for a better quality of life. He has spent the last 15 years bringing together the major partners providing technology and funds for this adventure. Together with his wife Michèle, he conceived the Solar Impulse project as a now widely recognised platform to raise public awareness and encourage political actions in favour of clean technologies and energy efficiency.

With his dual identity as a medical doctor and explorer, Bertrand Piccard has become an influential voice heard among the most distinguished institutions across the globe as a forward-thinking leader in progress and sustainability. He is a trusted adviser and influencer for the development of new societal solutions, and a very sought-after speaker for private and public audiences.

Bertrand is a flamboyant speaker and his spell binding presentations captivate audiences with their dramatic images and examples from his amazing adventures.

He presents in English, French and German.