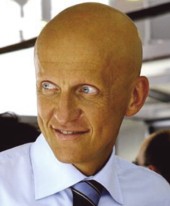 Pierluigi Collina is without a doubt the world’s greatest football referee. He has reached the highest level in the game and is renowned for his pinpoint decision-making, fairness and calming influence. Career highlights include the final at the Atlanta Olympic Games in 1996, the UEFA Champions League Final in Barcelona 1999, the World Cup in France in 1998 Euro 2000 and the World Cup in 2002.

Since his first matches it was clear he had a good aptitude for refereeing and in only three years he reached the highest regional level, where he stayed for three seasons. In 1995, after officiated 43 first class matches he finally joined the prestigious FIFA list of international football officials.

Pierluigi offers audiences a glimpse of how he has reached the top of his trade and his dedication to the role which has brought him fame and celebrity. He explains in meticulous detail how he became an official and what it takes to be the best and stay the best.

His presentations are inspirational and filled with anecdotes and humour. Often under the spotlight of the world’s media Pierluigi is highly professional and well used to dealing with the pressures of a live audience.

He presents in Italian, English, French and Spanish.