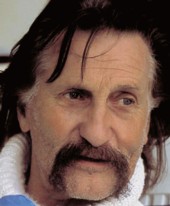 Luigi Colani may be the best-known designer the world over - recognizable by his "Colani" signature on all his designs and products as well as by the biodynamic forms he creates, modelled after nature itself. He has enjoyed an extraordinary career as a designer, creating many of the forms that are visible in today’s society. In 2007 he was awarded the "Life-Time-Award" in the famous Design-University of Pasadena as a further prize for his life time work, having received numerous design awards.

Luigi’s philosophy of ergonomic design can be seen in designs including Canon's easy-to-grip T-90 camera and the aerodynamic form of Sony headphones. His design accomplishments include golf equipment, shoes, eyewear, jewellery, luggage, lighters, automobiles, airplanes, telephones and bed linen. In the 1990s, he developed the first PC without edges and right angles for Vobis. In 1953 he moved to SIMCA in France where he developed the very first fully plastic car body.

For over five decades now Colani has been the unabashed agent provocateur of the design world. Luigi Colani’s greatest strength is that he thinks in terms of grand utopias, creating ingenious drafts for designs that preempt much of what is not yet technically feasible. He has also spoken and presented at worldwide exhibitions and also the WEF in Davos, Switzerland.

Luigi Colani's design genius is obvious in his fascinating presentations that entertain and enthrawl eager audiences worldwide. He has also found tremendous acceptance in the industrial world.

He presents in German, Italian and English.