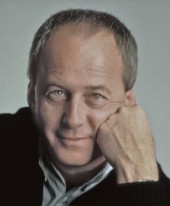 Alberto Alessi has been described as the ‘godfather of Italian product design’.
Now Managing Director of Alessi Spa, using his entrepreneurial flair he has successfully explored the frontiers of design and technology. As a result, he has repositioned the company as a design leader partnering world class designers.

Deservedly, his risk management skills are sought by prominent technology and design led organisations around the world.

It its third generation Alessi took the company helm in 1970 and has radically extended the product offering from the fundamental household and trade fare to include innovative yet practical products.

Not surprisingly, he received the MBA Design Award for Lifetime Achievement from the Brooklyn Museum, New York. He also holds a number of honorary titles from various academic institutions.

Exploring the often fine line between opposing forces - like success and failure – he tempts you into a new world of possibilities.

Based on the Alessi story he shows you how stretching your approach to embrace the borderline between traditional and avant-garde thinking you can increase your potential.

Stylish by name, nature and profession this distinct personality will lift your spirit.