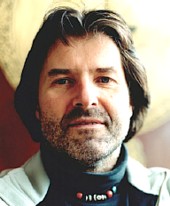 Bruno Baumann is considered one of the foremost experts on Tibet. His work has earned him international acclaim as an authority on the land and culture of Tibet, the Himalaya and Central Asia. His wanderlust has lead the extreme adventurer to the most beautiful countries in the world for more than a decade and increasingly extreme situations. The photographer, filmmaker and pioneer in the field of desert exploration has also written about a dozen books making him an award-winning writer.

After Beijing reopened Tibet to foreigners in the mid-1980s, Baumann, an ethnologist by profession, began spending months at a time on the rooftop of the world. He first made a name for himself in 1994 as the leader of the groundbreaking UNESCO expedition across the heart of the Gobi Desert. He was also the first to successfully scale peaks in the Sahara's highest mountain range. In 2003, Bruno made history by being the first man who crossed the sandy heart of the Gobi desert solo on foot.

Bruno's travels have taken him to nearly every corner of the world. His speeches and seminars give his audiences a new set of possibilities; change their ideas about what they can achieve and help them to make a difference.