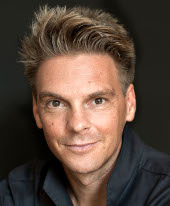 Marc Gassert is a communication scientist as well as a Japanese scientist who spent much of his life in different cultures on different continents. He learned the Asian martial arts from renowned grandmasters and offers the transfer of knowledge between Far Eastern and Western culture.

Inner strength, willpower and breathtaking body control - these are the abilities for which the monks of Shaolin Monastery are admired worldwide. Gassert was able to absorb these virtues and centuries-old philosophies and traditions during his stay in Asia for several years with various grandmasters.

"It's not the beginning that is rewarding, it's the perseverance!" With this slogan Gassert shares his attitude towards life - translated for our everyday life, full of enthusiasm, clarity and efficiency and motivates his audience.

Achieving goals does not require more strength, knowledge, talent or opportunity but the self-discipline to use what we have available. Gassert demonstrates the appropriate "Toolbox", makes it accessible thus helping everyone to fully exploit their own potential.

The word "discipline" has often a very negative connotation because it sounds like hardship, drill, obedience, coercion and punishment. Gassert wants us to stop using this word. He believes ‘discipline’ is one of the most important virtues in life and something we should strive for as it helps us to achieve our private or professional goals.

In China, a generation is currently growing up which despite hard work does not seem to be affected by burnout. People work 16 hours a day, seven days a week without getting tired or sick! Where does this unusual willingness to perform, this hidden source of energy, the ability to not get stressed come from? The secret is to have the perfect balance in life.

Gassert explains the mechanisms of FANGSON (balance between "effort" and "release") and offers a transfer into the Western world. Learn how to "quick charge" your battery for more energy in this crazy world of modern high-performance. In his presentations Gassert combines humor with intriguing, enigmatic and informative elements.