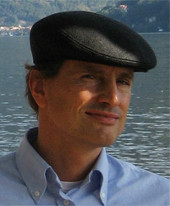 Prof. Dr. Jürgen Schmidhuber is a computer scientist and artist known for his work on machine learning, Artificial Intelligence (AI), artificial neural networks, digital physics, and low-complexity art. His contributions also include generalizations of Kolmogorov complexity and the Speed Prior. Since 1995 he has been co-director of the Swiss AI Lab IDSIA in Lugano, since 2009 also professor of Artificial Intelligence at the University of Lugano.

Since age 15 or so his main scientific ambition has been to build an optimal scientist through self-improving Artificial Intelligence, then retire.

His formal theory of creativity & curiosity & fun explains art, science, music, and humor. He generalized algorithmic information theory, and the many-worlds theory of physics, to obtain a minimal theory of all constructively computable universes - an elegant algorithmic theory of everything.

Many famous leading companies (Google, Apple, Microsoft, Baidu, etc) are now using the machine learning techniques developed in his groups at the Swiss AI Lab IDSIA (USI & SUPSI) and at the TUM CogBotLab.

He also created and illustrated the concept of Low-Complexity Art, the information age's extreme form of minimal art. Since 2009 he is member of the European Academy of Sciences and Arts.

He also is recipient of the 2013 Helmholtz Award of the International Neural Networks Society, and of the 2016 IEEE Neural Networks Pioneer Award, for "pioneering contributions to deep learning and neural networks."

At numerous events (TEDx etc) his talks were the most popular ones.