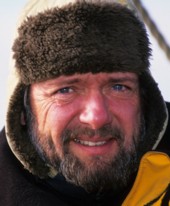 In 1989 the German Polar Explorer Arved Fuchs and the famous mountain climber Reinhold Messner were the first who reached the South Pole without animal or motorized help, just on skis with the help of kites. He is the first and - to date - only person to have reached both poles on foot within a single year.

He has been fascinated by polar exploration since his early childhood. After leaving school Arved Fuchs trained with the merchant navy to be properly equipped for later missions. He studied Vessels Operational Technology as far as the intermediate examination at the technical college in Flensburg and then became self-employed. He gained experience of traditional ships by sailing with the "Clipper", "Aphritite", "Albatros" and "Thor Heyerdahl". Finally, he bought and renovated the old shark cutter "DAGMAR AAEN" in 1988. Thereafter, he could undertake missions with his own boat. He has led a number of expeditions to the Arctic and Antarctic regions. In summer 2007 Arved Fuchs was the initiator of an international youth camp in Spitsbergen in the Norwegian territory of Svalbard, which should help today's youth to become more sensible of the problems connected to climatic change.

The polar explorer stands for an increasing awareness of climate and environmental issues. Fuchs warns about climate change, that this was no longer an unconfirmed report, but a real problem that is affecting all levels of society. The ice in the polar region is shrinking, not only in terms of its surface area, but also in terms of thickness. In his keynotes he describes the sobering truth of the matter, documented by maps of the ice. The images show the decrease in surface area of the North Pole ice between 2003 and September 2007.

Arved Fuchs is an enthusiastic speaker who is capable of motivating and inspiring an audience to greater things. He breaks down barriers and encourages us to achieve the impossible with his stories of overcoming incredible hardship.