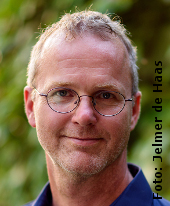 Dr. Patrick van Veen’s mission is to make managers and entrepreneurs aware of our biological behaviour. He advises companies, delivers speeches and organises corporate workshops on social behaviour and organises training sessions for managers, in co-operation with the Apenheul Zoo.

Patrick van Veen studied Biology at the biology faculty of the University of Utrecht, graduating in 1993 in Social Biology. He then worked freelance for social organisations, the government and the University of Utrecht. In 1996, he made a radical turn. He decided to pursue a real career this time and joined an insurance company, where he held various positions, studied and specialised as a project manager. He took part in a management development program. In 2002, he became an independent biologist again and started his own company.

In his pioneering presentations, Patrick van Veen shows how an important part of our behaviour is determined by the same impulses that determine the social behaviour of apes. In his fascinating speeches full of actionable messages, Patrick addresses questions like 'Why do we show certain behaviour?', and 'Why do problems arise?'.

He presents in English, Dutch and German.