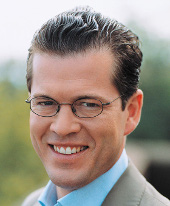 Baron zu Guttenberg is one of the most popular European politicians. In 2009, he was appointed as Minister of Economy and Technology, later assuming the role of Germany’s Minister of Defence in the cabinet of Chancellor Angela Merkel. As a “Distinguished Statesman” at the Center for Strategic and International Studies (CSIS) in Washington he leads a new high-level transatlantic dialogue initiative focused on current political, economic, financial, as well as technology issues. Since December 2011, Baron zu Guttenberg serves also as a Senior Advisor to the European Commission’s “No Disconnect Strategy”, providing strategic counsel on how to give on-going support to internet users, bloggers and cyber-activists living under authoritarian regimes.

Karl-Theodor zu Guttenberg served as a member of the Bundestag (German Parliament) from 2002 to 2011 and as a leading member of the Bundestag’s Foreign Affairs Committee from 2002 to 2008. As Minister of Defence, he led the most significant structural reform to the German Bundeswehr. Baron zu Guttenberg has published numerous articles in national and international papers and magazines on foreign, economic and security policy.

One of Angela Merkel's government’s star performers, he is no stranger to controversy. He offers an un-paralleled insight into world politics, foreign affairs, the economy and defence policy. With a strong background in technology and hands on experience defining the EU’s “Internet Policy”, Baron zu Guttenberg is also a highly sought-after commentator on technology development and effective use of the internet.

Karl-Theodor zu Guttenberg is a dynamic speaker whose messages are powerful and revealing, presented in the highest of professional styles.

He presents in German & English.