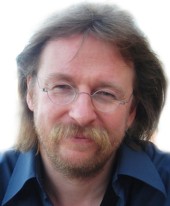 Kai Krause is a software artist and user interface designer, best known for founding MetaCreations Corp., for his widely acclaimed Kai's Power Tools series of products, and for revolutionizing the state of graphical user interface design at that time. The real success of the software was in pioneering revolutionary interfaces, deeper concepts of realtime interaction, and aesthetic designs of organic shapes, rounded edges, soft shadows and layers which are now many years later standard parts of OSX and XP.

Born in 1957 in Dortmund, Germany, Krause moved to the United States in 1976. He worked with early synthesizers and vocoders. He worked on almost thirty records and movies, and received a Clio award for the sound effects on the first Star Trek movie. Krause has a Master's degree from the Brooks institute in Santa Barbara, California (1996), and a Doctorate h.c. from the University of Essen, Germany (1999). and Newsweek selected him as one of the 50 most influential thinkers of the next decade.

Kai Krause talks in depth about current developments in new technologies and what this will mean to all of both from a business point of view and on a more personal level. He highlights the benefits of these new technologies and shows organisations how they can use creativity and innovation to dominate the market place.

Kai’s highly interactive presentations are revered by many as ground-breaking and magically visual and his charismatic personality and unique approach are always well-received.

He presents in English or German