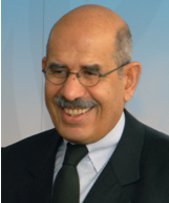 Mohamed ElBaradei is the former Director General of the International Atomic Energy Agency (IAEA), an intergovernmental organisation within the United Nations system and Nobel Peace Prize Joint Winner (with the IAEA) in 2005. He has also served in various roles within the United Nations in New York, including Director of its Legal Division, head of the Division of External Relations, and Assistant Director General for External Relations. 2012 he became the coordinator of National Salvation Front. He was Vice President of Egypt (14 July 2013 - 14 August 2013.

Dr. ElBaradei gained his initial law degree at the University of Cairo and subsequently a Master’s degree and Doctorate in international law at the New York University School of Law. He began his diplomatic career in the Egyptian Ministry of Foreign Affairs and he belongs to a number of professional associations, including the International Law Association, the American Society of International Law, and the Nuclear Law Society.

As a diplomat and distinguished senior member of the IAEA secretariat Dr. Mohamed M. ElBaradei offers audiences the knowledge gained from his vast experience to gain insights into global leadership and world affairs.