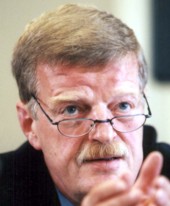 Professor Manfred Lahnstein is a respected international consultant to companies throughout Europe, the USA and Japan and is member of several Advisory and Supervisory Boards.

After graduating in Economic and Social Sciences, he started his career in 1962 as a consultant to DGB District Nordrhein-Westfalen. In 1965 he became the German Representative to the European Trade Union Secretariat in Brussels and was appointed Head of Cabinet of the European Commission in 1967. He returned to Bonn in 1973 as “Head of the Economic Department” and a year later he became member of the Ministry of Finance. In 1980 he was appointed head of the Federal Chancellor’s Office and in 1982 he became the Minster of Finance.In 1983 he was elected as Member of the Federal Parliament.

In 1983 he entered private industry as Board Member of the Bertelsmann Corporation, where his responsibilities span across the printing and electronic media division. In 1994 he joined their Advisory Board.

Since 1986 Professor Lahnstein has also been Professor for Cultural Management at the Hamburg Academy for Music and Theatre. Professor Lahnstein is also President of the German-Israel Society, Member of the Trilateral Commission and since 1996 Chairman of Board of Trustees of DIE ZEIT Foundation.

In his latest publication “Mut zum Risiko” (Courage for taking risks), he describes and analyses the basic problems of modern society and tells what changes are urgently needed at political and economic levels for Germany and Europe to compete on international level in the Information and Communication Age.