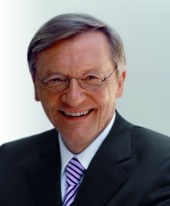 Wolfgang Schüssel is a Christian Democratic Austrian politician and was the Chancellor of Austria from 2000 until 2007. He succeeded Tony Blair as European President and held this position for the first half of 2006. Dr Schüssel was also Vice-Chancellor and Foreign Minister of Austria from 1995-2005. In January 2007, after stepping down as Chancellor, he became “Klubobmann” of the ÖVP.

With a wealth of experience in the European political arena, Dr Schüssel is ideally qualified to talk in depth about the Future of an ever expanding Europe and the business opportunities this will provide to organisations across Europe.

He presents in German and English