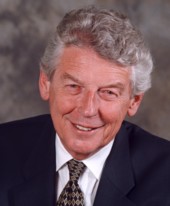 On the 22nd of August 1994 Wim Kok was appointed Dutch Prime Minister and Minister of General Affairs in the first government that bore his name. In 1998 he was re elected for a second four year term before being succeeded in 2002 by Jan Peter Balkenende. At present, Wim Kok is a Member of the supervisory boards of ING Group, Royal Dutch Shell, TNT and KLM as well as a Member of the Strategic Advisory Panel of The European Business Awards.

With a wealth of experience and expertise gained through his impressive career in politics and as a European political leader, Mr Kok offers decision makers great insight into the current European and global economic, social and political issues.

Mr Kok is an engaging speaker with a strong political background and great insight into future issues affecting European and global financial markets. He presents in Dutch, German or English.